I had to make a major backtrack when I realized my grave error: I’d passed through Montgomery without visiting the National Memorial for Peace and Justice.

True peace is not merely the absence of tension; it is the presence of justice.

–Martin Luther King, Jr. (on a wall at entrance)

This was one of the very first landmarks I put on a list, before I made a map, before I bought the van, when I first started thinking about taking this trip. There was no question, when I realized my mistake, that I’d go back to Montgomery.

This is the new lynching memorial that opened last year, and naturally it is also just a few blocks away from those other monuments and landmarks I visited a few days ago. (I’m still pretty frustrated with myself.) I did find the practicalities quite a bit more daunting, though. It’s a new place; they’re still figuring some things out, like signage. Because it’s outside, I thought I could walk Hops through the memorial (we have so appreciated being able to do some of these sites together), but no. So back to the van to put Hops up. Then back to the front gate for my ticket. No, have to go back across the street (back to the van) to get the ticket at a different location (why no signage for this?). Then into a long line as a school group showed up, and metal detectors – they have metal detectors at the Civil Rights Memorial Center, too (though not at the Birmingham Civil Rights Institute, for whatever reason). By the time I got in, twenty minutes or so had passed. Still worth it.

The memorial consists of metal pillars for each county in which a confirmed lynching took place between 1877 and 1950, along with the dates of the lynchings and the names of the victims (sometimes, unknown). These are hung (no coincidence, I’m sure) in a grid that encircles (ensquares?) a central square space, reminiscent of the kinds of public spaces where some lynchings took place: courthouse lawns, city centers, parks. You begin by walking among the pillars, but eventually the earth drops away, the monuments elevate, and you crane your neck upward to read them. County names are also etched underneath.

A few sculptures punctuate the experience, arranged around the main monuments but inside the security perimeter. A “Monument Park,” likewise within the perimeter, lays out a duplicate of every county’s monument, in the stated hope that those counties around the country will claim their own history and display these pieces on their own ground. So far, all appear to remain here in Montgomery. We need to own this, y’all… 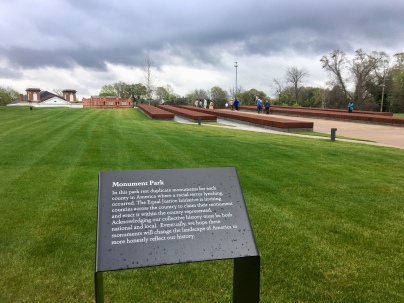 women of the bus boycotts 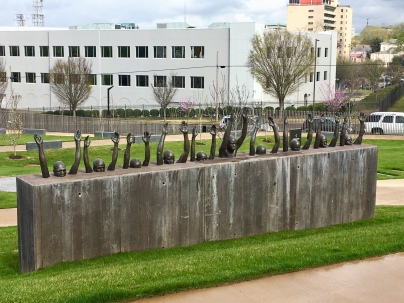 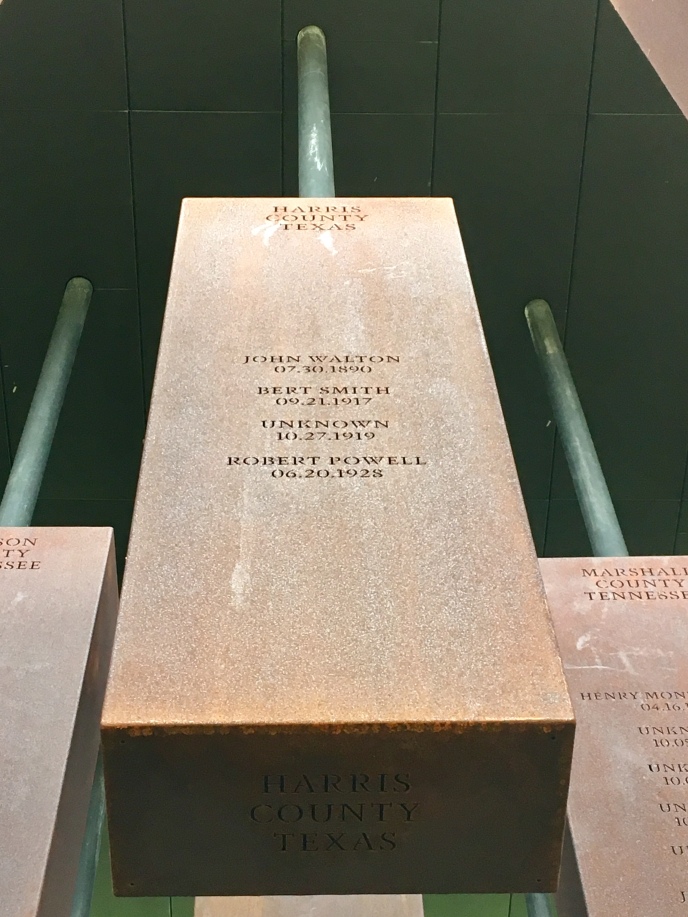 the grounds also include these lovely gardens, as if to give us a breath of life after all that death

they just go on and on 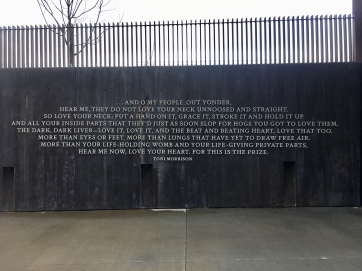 As you see, there’s also a beautiful and sweet-smelling flower garden, this time outside the security fencing (and accessible to Hops), presumably to refresh the senses.

Again, a somber thing, a difficult thing to contemplate. But we must!