… I visited a couple of urban ruins. I love this stuff.

I’m not sure how a building shows a grasp of humanitarian ideas, but okay. Mills is still in use as an office building today (and still associated with mental health services), but the rest of these grounds vary. The Babcock building is boarded up and copiously wreathed in chain link and warning signs boasting of arrests “in the last 30 days” (and a cop car was conspicuously parked out front). The Chapel of Hope is boarded up but approachable. I was originally attracted by a huge brick complex that I imagine housing residential units. Such brick beauty! I hope they manage to renovate and reuse these lovely structures, but they’re looking pretty far gone. On the same grounds is a new-ish baseball stadium doing fine business, though, as well as the barbecue restaurant I enjoyed the other night. Again, a strange and complicated world.

The Chapel of Hope (vulture for atmosphere)

I can’t find a name for this building

Next I visited the Guignard Brick Works, where they used to make the bricks for these lovely old buildings. The site itself is a construction zone; I parked at a bank and Hops and I walked over. The apartments under construction are going to be the “Brickworks Apartments,” but nothing seems to be being done with the old works, themselves. Fascinating stuff. 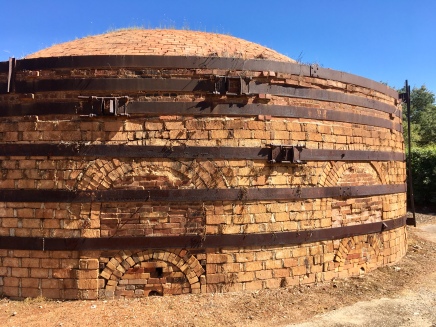 lovely brickworks even on the Brick Works

Leaving the city proper we headed for Congaree National Park, which according to their literature “protects the largest remaining tract of old-growth bottomland hardwood forest in North America… Trees average over 130 feet in height, making Congaree one of the tallest deciduous forests in the world.” Hops and I walked a few miles through American beech, bald cypress, loblolly pine (the tallest trees in South Carolina), switch cane, dwarf palmetto, and much more. The bulk of our hike was on boardwalk over swampy earth or over water, where I saw a bunch of fat crawdads and one crab, but no snakes (some folks I met had counted five). I also saw an old still, left over from Prohibition (again so says the pamphlet). The dominant feature was cypress knees, on and on as far as the eye can see. We walked out to Weston Lake but I had not brought Ritchey’s ashes with me. 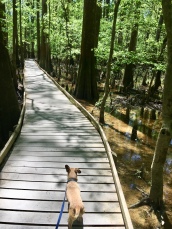 And then on to our campsite for the night.