It’s all beginning to run together a bit, I confess. Especially with nothing like an important museum or landmark or important trail to tie it all together. I’m working on those things.

Hops and I have had some wild walk/runs (me/him) on the beach, even under tornado watch – we got sandblasted, but we were still happy to be where we were. What do you do about a tornado watch in a van, anyway? You hope. And we got through it all fine, although wet.

I called it homesickness at first, but really I was just missing a Lone Star beer (sniff). So I put a Pabst in a koozie and did my best at a local beer bar. Which was fine.

And then we headed north to Carolina Beach State Park – in the state of North Carolina, now – where we are camping and dawdling. We did a longish hike (nearly six miles, longer than usual) and looked for the Venus flytraps that are indigenous to these parts, but didn’t see them. I did admire the pitcherplants, though. And Cape Fear River. Ritchey would have loved it. We visited Sugarloaf Dune, where, I’m told, American Indians lived from 6000 BC until the 1700s (when, one suspects, white folks may have had something to do with their demise). 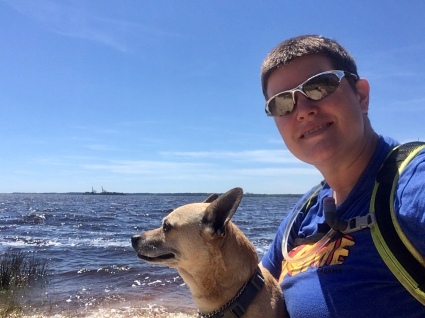 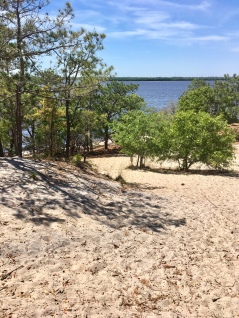 Then there was Kure Beach, which is pretty much the reason we are in these parts – remember Larry from Johnson City? This is one of his and Karin’s favorite spots. We visited their home bar; and of course the brewery down the street which is named after my dog. 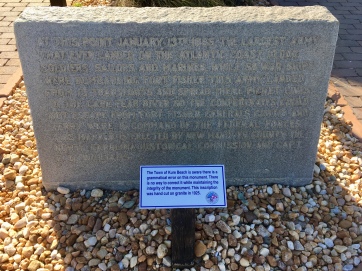 We’ve also checked out the city of Wilmington, for its beer (whew) and its lovely enormous Greenfield Park, and its Amazon lockers, where I have finally picked up a pair of binoculars and a set of solar panels. [I’m really regretful that I waited this long – more than halfway through my trip, at least for 2019, now. But better late than never. I can always use the binoculars in any life I lead (I think), and the solar panel I will hope to keep using on future van trips (2020), or I have a friend who’s interested.] 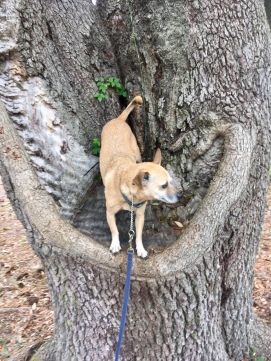 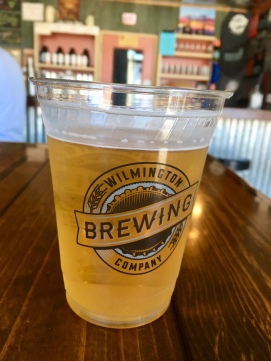 Hops is suspicious of Greenfield Lake, as of all water

I have no idea what’s next, you guys. Stay tuned and we’ll find out together.