It has been a good six weeks or so since I hit my ninth state (Georgia), because I’ve spent so much time circling Tennessee-Georgia-two-Carolinas. Finally my tenth state: Virginia. This is a beautiful place! All the driving has been perfectly lovely, and I could scarcely keep my eyes on the road for admiring the bike path that ran alongside state highway 5 into Richmond for some 40 miles. I stopped off to see another significant tree: the Emancipation Oak in Hampton, where newly freed slaves learned to read and write under its branches before a school was built, and where they gathered in 1863 to hear the Emancipation Proclamation read aloud. The tree is now on the site of Hampton College, an HBCU whose forerunner was that first school under the oak, led by free-born African American Mary Smith Kelsey Peake.

Hops under the Emancipation Oak 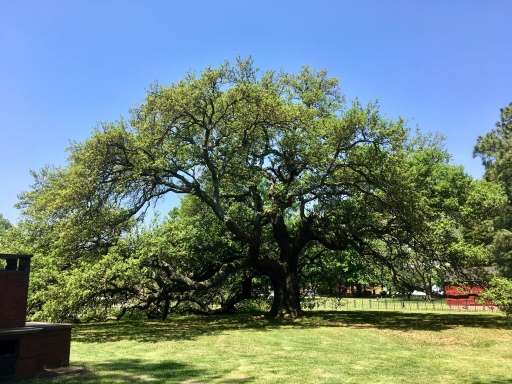 I made a very brief visit at a friend’s house in Richmond to pick up some books – I’ll be back to see them again, but very much regret that I didn’t get a picture! (Thanks for the mail service, Beasa!) And they live in a really neat-looking, eclectic neighborhood. I didn’t really spend any time in the city, but what I saw, I liked (for a city). And then back out to the sticks.

Confession: I have rented a home for the week via Airbnb. Yes, this is cheating. But hear me out. I needed to say in one location for a week, and there is little to no free camping in these parts. It is getting very hot, daytimes. Having a home base–with air conditioning–allows me to leave Hops and go off on adventures (like riding my bike, which I have done very little of lately, because of the heat). I got a great deal on this place that’s actually less than campsites around here cost. So, there’s good and bad: the house reeks of cigarette smoke, and the bed is terrible–I just sleep in the van, which is fine. I like to sleep in the van! We have a little dock on a creek off the Rappahannock River. We have a kitchen, a bathroom, and a couch in the air conditioning. I’ve been doing early-morning yoga outside on the lawn, and riding my bike on the quiet country roads while Hops stays somewhere safe and cool. I bought lots of groceries that needed refrigeration, and fragile produce like pears!, and I’m doing a bunch of cooking. This was my birthday present to myself. And, again, cheaper than camping. That’s weird but true. 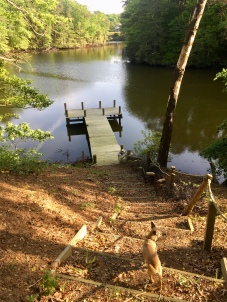 I’ve seen killdeer, hawks, buzzards, cardinals, Eastern bluebirds, a huge snapping turtle, deer, wild turkeys, a bald eagle, and Hops. Previous guests of this Airbnb have seen beaver; my fingers are crossed. (Have I told you how many beaver I’ve seen on this trip already? I’ve been lucky.)

So, an interlude. It’s cheating, but what the heck. This is my trip.